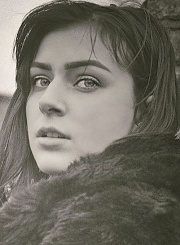 Jordanne played the leading role of Emma in Metal Heart (Treasure Films), Hugh O’Connor’s directorial debut, for which she won the Bingham Ray Best New Talent Award at the Galway Film Fleadh in 2018. She is currently appearing as Lily in Dead Still (Acorn/RTE) and will soon appear in a guest role in The Alienist: Angel of Darkness (Paramount/TNT) due for release later this year. Now 19 years old, Jordanne is a leading member of Ireland’s new generation of screen actors. Trained at Bow Street Acting Academy under a full Scholarship, Jordanne appeared as MINNIE in REBELLION, a major new period mini-series starring Charlie Murphy, Ruth Bradley and Sarah Greene for RTE/Touchpaper/Zodiac/Sundance TV directed by Aku Louhimies in 2016 and in it’s sequel RESISTANCE in 2019. Jordanne also appeared in the short film MY FATHER MY BLOOD opposite Barry Ward for Just A Little Productions UK in 2017 at Galway Film Fleadh. Jordanne has appeared in leading roles in numerous short films in recent years as she combines her college and acting careers, including no less than four short films in the Dublin Film Festival of 2020, including Young Mother which was just nominated Best International Short at the Palm Springs International Shortfest 2020.

Jordanne starred in HEARTBREAK by Emmet Kirwan, a spoken word piece on YouTube directed by Dave Tynan which gathered huge viewing numbers in 2017 (see above).

Jordanne is also three times Dublin Champion, Leinster Champion and all Ireland finalist in her section in Boxing and she danced (Free Style) in the Worlds, Europeans and all Irelands and placed 1st, 2nd and 3rd on many occasions.

“The weight of the film lies particularly heavily on Jones’s narrow shoulders and she emerges as a pocket marvel.”
Donald Clarke, Irish Times

“Jones is a find, having the interior illumination of a young Saoirse Ronan.” Katy Hayes, The Sunday Times