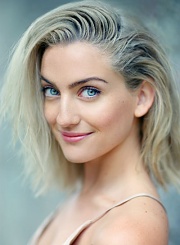 India can now be seen on stage in Meat at Theatre 503. She will next be seen on screen in the BBC’s adaptation of Sally Rooney’s Normal People, in the role of Peggy.

India trained at the Gaiety School of Acting in Dublin.
She is best known for the recurring role of Katie Kiely in the multi award winning series Red Rock (TV3, BBC).

India recently appeared as Belle Moffat in Little Women, a 3 part mini series for BBC , KRYPTON for SyFy with Warner Bothers TV and DC and on Season 2 of AMC’s Into the Badlands after appearing in Season 1.

Other screen credits include History Channel’s hit series Vikings, Women on the Verge for UKTV and the role of Deirdre in Deirdre- a short film by Jo Southwell.

India’s theatre credits include Light a Penny Candle , the role of Eurydice in The Eurydice Project directed by Lee Wilson at The Project Arts Centre, Changed, a new play written by Marnie McCleane-Fay and directed by Aonghus Óg McAnally, Tales from the Woods, directed by Karl Shiels, and Rough Magic’s production of The Critic, directed by Lynne Parker for Dublin Theatre Festival 2013.