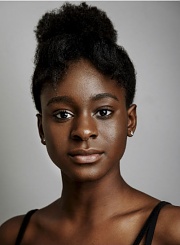 In the summer of 2021 Florence was cast as Ruykaya Momoh in Frank Berry’s (MICHAEL INSIDE) new feature film AISHA for Subotica/Cornerstone Films, starring Letitia Wright and Josh O’Connor and due for release in 2022. Florence also shot a role on JOYRIDE in 2021, opposite Olivia Coleman, directed by Emer Reynolds for Embankment/Subotica Films and due for release in 2022. As part of the same busy year, Florence shot the role of Amanda in YOU ARE NOT MY MOTHER, a new feature film written and directed by Kate Dolan for Fantastic Films which made it’s world premiere at the Toronto Film Festival 2021 and will make it’s Irish premiere at the Dublin Film Festival in 2022.

Now 18 years old, Florence was born and raised in Dublin to Nigerian parents and first appeared in the role of FLORA in RTÉ’s crime drama TAKEN DOWN in 2018, written and produced by Stuart Carolan (LOVE HATE) and directed by David Caffrey (LOVE HATE, PEAKY BLINDERS).

Since then she has also appeared in FINDING JOY (Treasure/RTE), short film CAILIN ALAINN (Pretty Girl), DEAR IRELAND (Abbey Theatre). Florence was part of the Young Screen Actors Academy at Bow Street, Dublin for several years and was cast from a nationwide search in her television debut in TAKEN DOWN. Florence also appeared in the video for Hoziers song, NINA CRIED POWER.