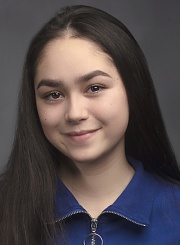 Ellie O’Halloran is a fifteen year old actress from Clondalkin, Dublin. She trained with Westside Stage School from the age of four years old, and appeared in several of their live shows at the Helix theatre, including Freaks, Finding Alice, Bring On the Adams and Dear Santa.

In 2018 she made her feature film debut as Kayleigh Davis Bradie in Roddy Doyle’s Rosie for Element Pictures, opposite Sarah Greene .

She will also appear in BBC’s brand new drama series The Dublin Murders, due for release later this year.