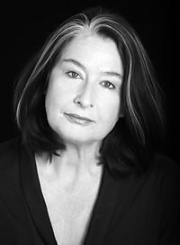 Eleanor was last seen on screen in season 2 of Derry Girls, opposite Ardal O’Hanlon.

Eleanor was co-founder of the award-winning Charabanc Theatre Company. In 1993 she received an EMA Best Actress Award for her work with the company, where she remained as Co-Artistic Director until 1995. Theatre credits include The Shape of Metal, Barbaric Comedies, Tartuffe, The Wild Duck and Hamlet at the Abbey and Peacock Theatres, Rough Magic’s award-winning production of Pentecost (Dublin Theatre Festival, Irish and British Tour, Donmar Warehouse, London). Shadow of a Gunman, Weddins, Weein and Wakes, The Factory Girls and Conversations on a Homecomingfor the Lyric Theatre, Belfast and Our Father (Almeida). She appeared in the Gate Theatre’s production of Jane Eyre directed by Alan Stanford and inAll’s Well That Ends Well directed by Andy Hinds for CSI Ireland. Eleanor received an Irish Times/ESB Best Actress Award in 2003 for her role as Maggie in Dancing at Lughnasa produced by An Grianan Theatre. Eleanor appeared in Paul Mercier’s Homelands at the Abbey Theatre Dublin. She appeared in Druid Theatre’s production of The Year of the Hiker directed by Garry Hynes for Druid Theatre Company on national tour. Eleanor appeared in Don Carlos for Rough Magic Theatre company (directed by Lynne Parker), Scenes From The Big Picture for Prime Cut Theatre Company, directed by Conall Morrisson, Unravelling the Ribbon for Guna Nua Theatre Company and Saved at the Peacock Theatre, directed by Jimmy Fay for which won a Best Supporting Actress Award from the 2008 Irish Times Theatre Awards. Eleanor appeared in The Recruiting Officer at the Abbey Theatre, Dublin, directed by Lynne Parker and as Lily in Pentecost directed by Lynne Parker for the Rough Magic/Lyric Theatre Belfast co-productionThe Parker Project in Dublin and Belfast. She appeared as Lilian in You Are Here produced by Living Space theatre company for Dublin Theatre Festival 2008 and in_ Solemn Mass For A Full Moon In Summer_ directed by Tom Creed for Rough Magic Theatre Company at the Project Arts Centre, Dublin, in The Last Days of Judas Iscariot directed by Matt Tormey at the Project Arts Centre, Dublin.