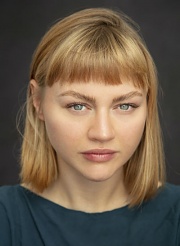 Eimear originates from Mullingar, Co. Westmeath. She graduated from the Lir, National Academy of Dramatic Art in 2016, with a BA(hons) of Acting.
She has just finished an Irish language feature film in association with the Abbey Theatre and ONETWOONEOTWO company, called “Éist Liom”.
She produces her own monthly radio show, called “The Jealous Wall” on Dublin Digital Radio, where she recites dark, twisted short stories written by Irish based authors.