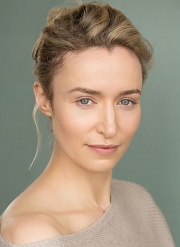 Deirdre will soon appear as the lead in the feature film Mandrake as well as the feature The Christmas Ball.
Recent TV credits include Angela Black, The Drowning (Ch5), Shadow and Bone (Netflix) and Miss Scarlet & the Duke (A+E Studio).

Deirdre won a Scottish BAFTA in 2017 for best actress in film for The Dark Mile.

Deirdre graduated with a degree in English Literature from the University of St. Andrews and went on to train at The Bristol Old Vic Theatre School.

Audio drama includes Dracula and Dorian and radio for BBC includes Positive, The Lake and Cavity.
Deirdre is represented by The Artists Partnership in the U.K.