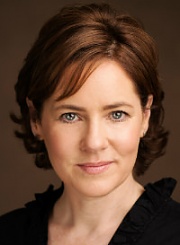 Biography – Barbara Griffin graduated from the Gaiety School of Acting in July 1991 performing in The Quirk Estate at the Project Arts Centre. On televison Barbara appeared as Jane Farley in the first series of Bachelor’s Walk (RTE) and Maid Marion in The New Adventures of Robin Hood for Warner Bros. Other television work include Dark Realm (Warner Bros), On Home Ground, Nighthawks, The Works (RTE), Glenroe and Ballykissangel. She has played Honor Blake in the Playboy of the Western World and Bianca in Othello both for Second Age, Mick Dwyer in Celebration by John McArdle (Dolphin Co) and The Rabbit in The Gingerbread Mix-up (Bickerstaffe Theatre Company). She toured the UK including the West End with Joe Dowlings production of Juno and the Paycock. She appeared in Dearg Doom for Iomha Ildanach which toured Germany, in the lead role in Striker for Bedrock Theatre Company directed by Jimmy Fay and in Oleana for Mad Cow Theatre Company directed by Simon McGill. Film work includes Heartline, a short film by Julian Plunkett Dillon and Helena directed by Aki Tsujitani. Barbara appeared in a leading role (Miss McCarthy) in Foreign Exchange, directed for Australian and Irish television by Declan Eames. Barbara is appeared in Death Of A Salesman at The Gate Theatre.