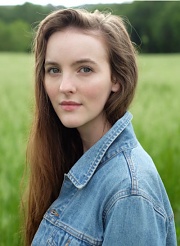 Ann is currently shooting on Joss Whedon’s brand new series for HBO The Nevers due for release in 2021. She will also appear in the leading role in Rose Plays Julie opposite Aiden Gillen, due for release later this year.

Ann was most recently seen playing the female lead, Beth Winters, opposite Jamie Dornan in DEATH AND NIGHTINGALES, an adaptation of the novel written and directed by Allan Cubitt, the creator of THE FALL, which aired on BBC TV early in 2019.

Ann appeared in the title role of independent feature film KISSING CANDICE (2017) directed by Aoife McArdle for which she was nominated for a Rising Star Award and a Best Actress In A Lead Role at the 2018 IFTA’s.

Ann appeared as Annie Moffat in the BBC/PBS mini series LITTLE WOMEN directed by Vanessa Caswell which aired in 2017.

Ann appeared as the recurring role of Rachel Reid in the IFTA award winning serialised Irish drama, RED ROCK for TV3 produced by Element Pictures and Angel Station, sold into BBC & Amazon prime from 2015 to 2017. Ann also appeared as Biddy Lambert in the RTE Drama Rebellion (2016) and more recently as Ethelfled in VIKINGS Season 5 for History/MGM.

Ann appeared as Hannah Baylor in the Blackpills series Playground for Apple TV France, a series created by Luc Besson.