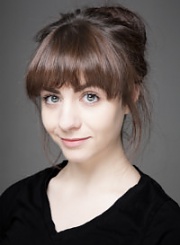 Amilia, a Dublin native, graduated from the Gaiety School of Acting in 2013.
During her time there she played such roles as Edie in Heroine for Breakfast, Directed by Joan Sheeny, Lily in Punk Rock, Directed by Gene Rooney and Sherbet in Fastest Clock in the Universe, Directed by Paul Brennan.

Amilia is a founding member and Artistic Director of Bitter Like A Lemon Theatre Company.
She is a classically trained soprano with a level 7 diploma from The Conservatory of Music and Drama and has 4 badges for competitive gymnastics.

Amilia will appear in the world premier of Roddy Doyles, THE SNAPPER, in The Gate Theatre this summer under the direction of Roisin McBrinn.