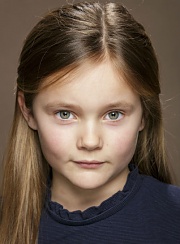 Amelie most recently appeared on screen in Float Like a Butterfly (written and directed by Carmel Winters for Samson Films) which premiered at the Toronto Film Festival 2018. She was last seen on stage in Hansel and Gretel at the Abbey Theatre.

She will soon appear in Miss Scarlet and the Duke (A + E Studios/Networks) which will air later in 2019.

On TV Amelie appeared as Mia Carroll in Striking Out Season 2 (2018) for RTE and in Paula (2017), an award-wining TV drama by Conor McPherson for the BBC.

Other skills: Amelie has a keen interest in gymnastics and is a very competent swimmer. She has a high level of spoken Irish and is an avid reader.