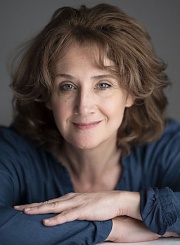 Ali was last seen on screen in The Windmere Children (BBC). She last appeared on stage in Driving Home for Christmas at the Lyric Theatre.

Ali appears in Simon Fitzmaurice’s feature film My Name Is Emily and will soon appear in The Truth Commissioner directed by Declan Recks and The Secret Scripture directed by Jim Sheridan. She recently finished shooting the role of Mary Shannon in The Fall S3 (BBC NI) and the role of Hilary in the mini series The Secret (ITV). Ali appeared in Fishamble’s production of Bailed Out! By Colin Murphy. She appeared in Deadly written and directed by Paddy Cunneen at the Peacock Theatre and in Borstal Boy directed by Conall Morrison at the Gaiety Theatre.

Ali trained at the Gaiety School of Acting. For the Abbey Theatre, Ali played Anna in Closer by Patrick Marber and Susanne in The House (Tom Murphy) and was nominated for an ESB/Irish Times Theatre Award for both performances. Other roles for the Abbey include Chrissie in Dancing At Lughnasa, Maire in Translations, Kate in Philadelphia, Here I come! and Helen in The Trojan Women. Other theatre work includes The School for Scandal, Northern Star, Lady Windermeres Fan and Love and a Bottle (Time Out Award) for Rough Magic; Aristocrats, The Double Dealer and A Midsummer Night’s Dream at the Gate Theatre; Silas Marner and Hard Times for Storytellers; Cheapside for Druid Theatre Company; Factory Girls for Bickerstaffe and two seasons at The Lyric Theatre, Belfast. Ali recently re-appeared in Dancing at Lughnasa for The Abbey theatre, Dublin. Outside Ireland she has appeared in The Steward of Christendom with Out of Joint; The Silver Tassie at the Almeida; Pygmies in the Ruins at The Royal Court; The Importance of Being Earnest at The West Yorkshire Playhouse and Playhouse Creatures at The Old Vic.

Ali is a frequent performer in RTE Radio Drama and BBC Radio Ulster.

Ali wrote and co-created Any Time Now: a six one-hour comedy drama series for RTE/BBC, starring Susan Lynch, Zara Turner and Angeline Ball. She has also worked as screenwriter on the last three series of The Clinic for Parallel Films/RTE and a number of other TV projects currently in development.

Ali appeared in Rough Magic’s production of Christian O’Reilly’s new play Is This About Sex? at the Dublin and Edinburgh Theatre festivals and on tour across Ireland, she appeared as Lady Capulet in Romeo and Juliet directed by Jason Byrne at the Abbey Theatre and appeared as Kitty in Spokesong as part of Rough Magic Theatre Company’s co-production with the Lyric Theatre Belfast, The Parker Project, directed by Lynne Parker which appeared in Belfast and Dublin. Ali appeared in Love and Money directed by Annabelle Comyn for Hatch Theatre Company at the Project Arts Centre, Dublin. She recently appeared in Kabosh theatre company’s production This is What We Sang at the 1st Irish Festival in New York City where it won Best Production at the 1st Irish Awards there in late 2010. She appeared as Trudy in The Passing written and directed by Paul Mercier at the Abbey Theatre and appeared in the hugely acclaimed Plaza Suite for Rough Magic at the Pavillion Theatre, Dun Laoighaire.