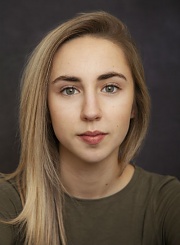 Aisling was last seen on stage in the role of Mairéad in Andrew Flynn’s production of The Lieutenant of Inishmore at the Gaiety Theatre. She can be seen on screen in Mark O’Connor’s brand new TV series Darklands , currently available to watch on the Virgin Media Player.

Aisling graduated from the Gaiety School of Acting in 2019 and was immediately cast in the leading role of Emma in the remount of Landmark Theatre’s award-winning adaptation of Louise O’Neill’s Asking for It at the Gaiety Theatre where it played to sold out audiences across the run.

She is originally from Tullamore, County Offaly.

Aisling received her training in the Arts at the University of Limerick, earning a BA in Voice and Dance. Following this, Aisling completed the Two Year Full-Time Actor Training Programme at the Gaiety School of Acting.